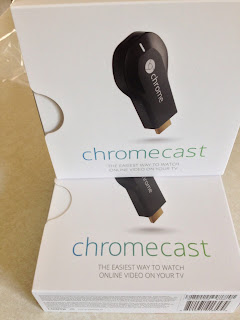 Chromecast is totally rock'n! I immediately ordered two Chromecast units last week while watching the livecast during a flight from Detroit to NYC. They were unexpectedly delivered before I made it back home. It's simply incredible how fast the world is changing driven by emerging solutions in mobile, social and cloud computing. Just two years ago, I was thrilled to get wifi on a plane and now its simply amazing to watch and order a newly announced product from a tablet while flying across the country!!

After an easy setup, the interesting features announced at the product launch last week such as Chrome tab sharing and multi-device support are quickly living up to the hype. Tab sharing is my hands down favorite feature right now which gets around the many blocking issues of other streaming media solutions. For example, I can now stream Amazon video to the living room TV via Chromecast while editing photos on another virtual desktop via Mission Control on the family iMac. < HUGE!
Chromecast is already starting to look like a home run for home media use. I've been a home media junkie for over 10 years. I've tried all sorts of different solutions from Windows MCE to Linux MCE to XBMC. A Mac mini has been our primary media device in the family living room since disconnecting from Cable TV over 5 years ago. While the Mac Mini provides the great flexibility in media streaming options, I've been using Apple TV more and more with launch of iCloud to stream all the HD media already purchased and locked into Apple DRM (sigh). I've also been using the AirPlay feature a lot lately, mostly to stream music and photos.

That said, the lack of Amazon streaming on the Apple TV and lackluster streaming performance when using AirPlay mirroring continues to bring me back to the Mac mini as I'd rather give up some of the video quality for greater flexibility and options of content streaming. Chromecast finally delivers on the gaps of the Apple TV with ability to stream Amazon video, multi-platform support and open SDK where I hope to see more streaming services natively support Chromecast like Netflix. After a weekend of solid performance from Chromecast while the Mac Mini remained powered off, it's looking like our living room Mac Mini may be retired very soon!

I think Chromecast will be a huge hit in the business world as well. I'll be sharing my thoughts on the business impact in a following post after I kick the tires using Chromecast on my next business road trip :)

Popular posts from this blog

April 27, 2014
After recently switching to an intermittent fasting plan, I've been seeking a solution for MyFitnessPal to support different macros on different days. A fellow coworker who's already lost 50lb on an IF plan pointed me to a reddit thread with a MFP custom macro script . It's an excellent little script and macro but I ran into some issues getting it to work. I started by attempting to run the script via OSX on my Macbook but found I had to install the Mechanize extension for Python. No big deal but when I ran the script for the first time, I got a what looked to be an Mechanize error which kind of threw me off. After digging around, I found the fix on another related reddit thread . That fixed the authentication issue but then the script failed again with a similar error related to the 'totalCallories' variable. macbook:site-packages user$ python macros.py Schedule section exists Sunday is: R All configuration options present Logging in Login sent L
3 comments
Read more

June 17, 2013
This was another great adventure on the golden coast to find the Bowling Ball Beach in Mendocino, California which proved a tad difficult to find. I plotted the location in Google Maps but when I was alerted that I arrived at my location, I only saw woods on both sides and I could tell I was at an elevated location far from the beach so I continued on down the road thinking Google Maps must have got it wrong. .. more on the Unified Photography photo blog . Bowling Ball Beach Sunset | Mendocino, California
Post a Comment
Read more